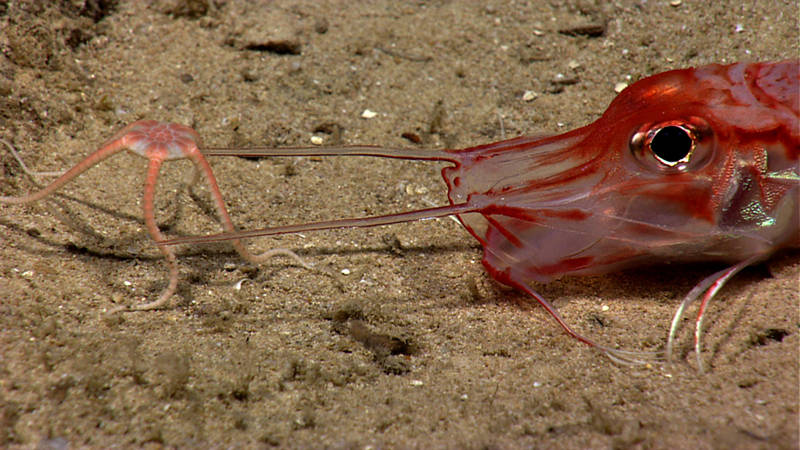 Seeing two deep sea animals interacting with each other is rare. What is particularly rare is when they behave the opposite of how we expect them to. As we approached this armored sea robin, a brittle star climbed on top. We were pretty sure that the fish would try to eat the brittle star, but as it turns out, it just wanted to dislodge the extra baggage. The brittle star then proceeded to climb on top of the sea robin two more times. Image courtesy of the NOAA Office of Ocean Exploration and Research, Exploring Puerto Rico’s Seamounts, Trenches, and Troughs. Download larger version (jpg, 1.6 MB).

Dive 06 investigated the top of a Late Oligocene to Pilocene platform carbonate sequence and traversed a relatively minor fault scarp. This fault is the easterly extension of an approximately 100-kilometer-long fault system that forms the northern wall of the rift between the Dominican Republic and Puerto Rico. The dive began at a depth of 593 meters on a relatively gently dipping, current-swept limestone pavement. After traversing 600 meters, more irregular topography was reached, which continued for about 1.2 kilometers until we reached and then traversed the eroded fault scarp. In terms of biodiversity, we had a great dive, documenting a higher diversity of coral, sponges, and fish than on the other dives so far. However, many of the scleractinian corals were small (less than 10 centimeter-tall colonies). Approximately 30 species of fishes were seen, including one observation of a queen snapper. Other fauna included anemones, sea stars, squat lobsters, and colonial tunicates. Highlights of the dive included a swimming terebellid worm, an armored sea robin responding to the ROV, and a rare sea urchin with paddle-like spines.