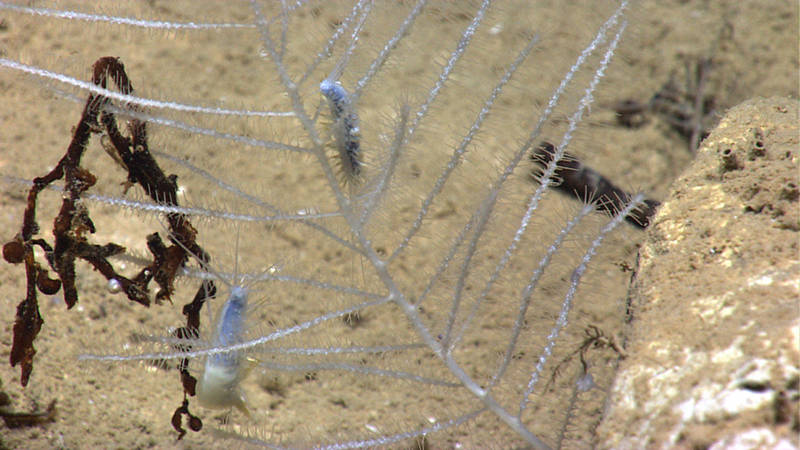 Highlights from Dive 4, which started with mid-water transects to explore the water column followed by exploration of the west wall of Mona Canyon. Video courtesy of the NOAA Office of Ocean Exploration and Research, Océano Profundo 2015: Exploring Puerto Rico’s Seamounts, Trenches, and Troughs. Download (mp4, 37.0 MB)

ROV Deep Discoverer (D2) began Dive 4 with a series of mid-water transects to investigate life in the water column. During these transects, D2 imaged jellyfish, larvaceans, midwater fish, and siphonophores. D2 landed on a sedimented seafloor with scattered rubble at a depth of 3,927 meters. Our dive traversed two large steep exposures of well-bedded Late Miocene to Oligocene platform carbonates, both of which were underlain by less steeply dipping sediment-covered slopes with boulders of carbonate derived from the outcrops above. Downslope, sediment-filled channels were present, and their presence, together with the small amounts of iron manganese coating on much, but not all, of the carbonate attests to the recent instability of this slope. Fauna during this dive included a diversity of sponges, arrow worms, sea pens, black corals, a bamboo coral, a ctenophore, anemones, a variety and large number of sea cucumbers, a halosaur, crinoids, several large grenadiers, a lizardfish, urchins, sea stars, and shrimp. Some of the highlights of the dive were a dumbo octopus, imaging several delicate gelatinous organisms including several beautiful jellyfish, and documenting several instances of a potential symbiotic relationship between a predatory tunicate and a polychaete.