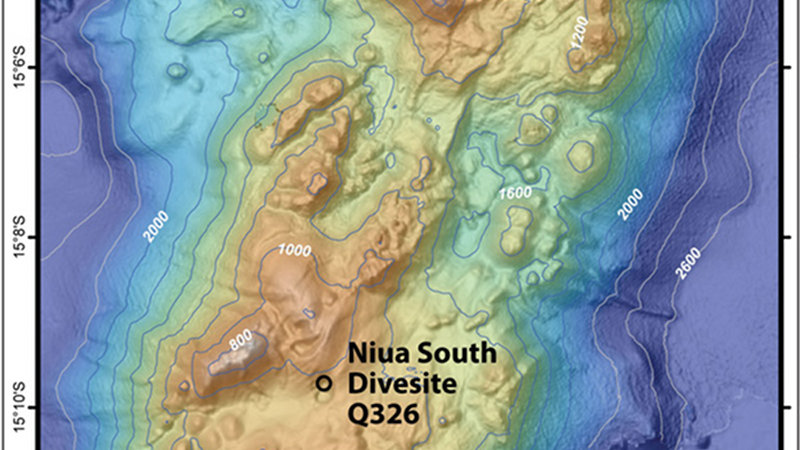 Niua Seamount is a strange but exciting place. Although it is the northernmost of the chain of shallow submarine arc volcanoes known as the Tofua Arc, it looks nothing like the “typical” conical arc volcano. It is shaped like a rhomboid (a rectangle with non-perpendicular sides). We don’t know why this is the case, but it probably has something to do with a shearing “tectonic” force being applied to this section of the arc.In any case, two vigorous hydrothermal systems have been discovered associated with shallow structures on its summit plateau.

The “North Niua” site is our shallowest dive location and appears to have an intense sulfur degassing system associated with a ridge at about 750 m. We recovered recently molten sulfur there during a rock dredge in 2011, indicating the presence of a shallow, gas-charged magma chamber - something we didn’t expect to see on what appears to be an old and “tectonically” broken-up volcano! Extensive beds of mussels and other vent-specific animals were imaged with a towed camera system.

The “South Niua” site, discovered by a team from Nautilus Minerals Inc. in 2008, is an extensive area of sulfide chimneys and mounds near and within a large heart-shaped, 300-meter diameter crater at 1150-1200 m depth. Our next dive (Q-326) will visit this intriguing southern site.